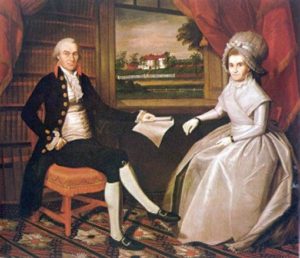 The second son of Captain David and Jemima Leavitt Ellsworth, Oliver Ellsworth was born in Windsor 29 April 1745. At 17 he went to Yale to study the ministry, but was expelled for “pranks”. Ellsworth graduated from the College of New Jersey in 1766 and began a study of law with Matthew Grant. He was admitted to practice in 1771. Elected to state level office in 1773, Ellsworth quickly became one of the most powerful political figures and successful lawyers in Connecticut. He served throughout the Revolutionary War in many state and federal political positions, including delegate to the Continental Congress, member of Connecticut’s Council of Safety, the Governor’s Council, and Committee of the Pay Table.

His contributions to his country did not stop there. While serving a seven year term as a US Senator, Ellsworth drafted the Judiciary Act, defining our current federal court system. In 1796, George

Washington asked Ellsworth to be the Third Chief Justice of the U.S. Supreme Court.

President John Adams appointed Ellsworth as a commissioner to France to renegotiate a treaty and prevent war with France. Highly respected by Napoleon, Ellsworth was successful. Upon his return from France and in poor health, Ellsworth retired from Federal service to an active service in Connecticut. He maintained a successful law practice, authored articles and served in the Connecticut legislature as a senator until his death in 1807.

Abigail Wolcott was born 8 February 1755 in East Windsor, Connecticut, the fifth of seven children born to William Wolcott, Esquire, and Abigail Abott. She married on the 10 December 1772, Oliver Ellsworth providing him with the strength and stability to continue his highly productive life. It was said of Abigail: “She exercised such concern and thoughtfulness for her husband’s needs that no anxiety regarding household cares ever disturbed his public life.”
Abigail bore 9 children with Oliver Ellsworth. Her influence as a mother was so profoundly felt not only in her children, all of whom became active in public service, but also in the lives of their descendants after them, many of whom carried out Oliver and Abigail’s commitment to excellence in public service in many fields of endeavor. Abigail Wolcott Ellsworth died 4 August 1818 and is buried in Palisado Cemetery, Windsor, Connecticut.